What is a PV Solar System? A Complete Guide

Home / News & Updates / What is a PV Solar System? A Complete Guide 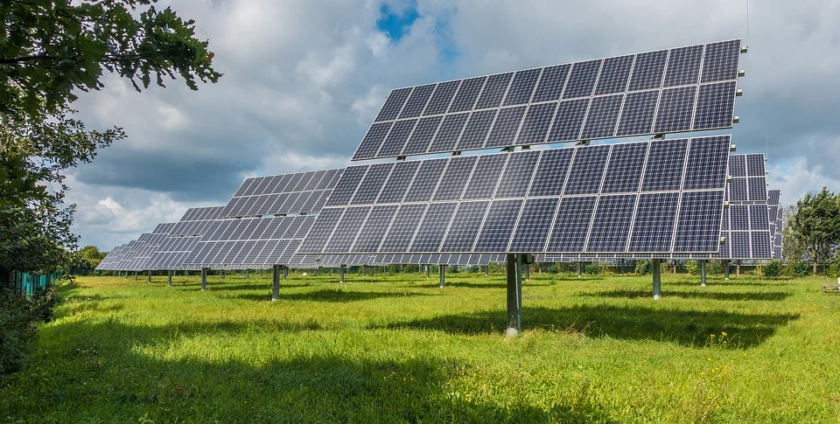 Solar energy has been quickly emerging as an alternative energy source. As of now, the country’s solar installed capacity was 48.556 GW as of November 2021. The nation’s solar capacity has grown eighteen times in the last seven years.

At an event, the Minister of State for Environment Ashwini Choubey said “Installed capacity of solar energy in India has increased by more than 18 times from 2.63 gigawatts in March 2014 to 47.66 gigawatt in October 2021. As a result, India’s current share of non-fossil sources based installed capacity of electricity generation is more than 40 percent.”

Such a huge market with high demand and supply for solar panels in India. With a huge market, there might be a lot of questions that may pop into the mind of a solar panel buyer. Here are a few questions related to PV Solar System.

What is PV Solar System?

A PhotoVoltaic Solar System aka PV Solar System is composed of one or more solar panels combined with an inverter and other electrical and mechanical hardware that use energy from the Sun to generate electricity. PV systems can vary greatly in size from a small rooftop or portable systems to massive utility-scale generation plants. Although PV systems can operate by themselves as off-grid PV systems, this article focuses on systems connected to the utility grid, or grid-tied PV systems.

Don’t confuse it with solar. There is a huge difference between photovoltaic and solar. Solar can be any form of collected energy from the sun which includes, thermal energy transfer. This could be used to heat water or a thermal mass like concrete. Photovoltaic is the process of converting electricity from sunlight.

What are the components of a PV Solar System?

In the case of the PV Solar System, the solar panels are the most important component. A solar panel consists of many solar cells with semiconductor properties encapsulated within a material to protect it from the environment. These properties enable the cell to capture light, or more specifically, the photons from the sun and convert their energy into useful electricity through a process called the photovoltaic effect.

The solar panels are made from crystalline silicon, which has a theoretical efficiency limit of 33% for converting the Sun’s energy into electricity.

Besides the solar panels, the inverter is also an important part. An inverter is an electrical device that accepts electrical current in the form of direct current (DC) and converts it to alternating current (AC). For solar energy systems, this means the DC current from the solar array is fed through an inverter which converts it to AC. This conversion is necessary to operate most electric devices or interface with the electrical grid. Inverters are important for almost all solar energy systems and are typically the most expensive component after the solar panels themselves.

Most inverters have conversion efficiencies of 89% or higher and contain important safety features including ground fault circuit interruption and anti-islanding. These shut down the PV system when there is a loss of grid power.

The final component important in a PV Solar System is the racking. Racking refers to the mounting apparatus which fixes the solar array to the ground or rooftop. Typically constructed from steel or aluminum, these apparatuses mechanically fix the solar panels in place with a high level of precision. Racking systems should be designed to withstand extreme weather events such as hurricane or tornado level wind speeds and/or high accumulations of snow. Another important feature of racking systems is to electrically bond and ground the solar array to prevent electrocution.

Other components like cables, connectors, combiners, disconnects, breakers and meters are also important for a PV Solar System.

How does a Photovoltaic Solar System work?

A photovoltaic cell is made of semiconductor materials that absorb the photons emitted by the sun and generate a flow of electrons. Let us now understand the PV solar system’s working.

Photons are elementary particles that carry solar radiation at a speed of 300,000 kilometres per second. When the photons strike a semiconductor material like silicon, they release the electrons from its atoms, leaving behind a vacant space. The stray electrons move around randomly looking for another “hole” to fill. 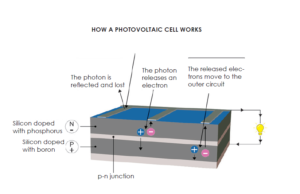 To produce an electric current, however, the electrons need to flow in the same direction. This is achieved using two types of silicon. The silicon layer that is exposed to the sun is doped with atoms of phosphorus, which has one more electron than silicon, while the other side is doped with atoms of boron, which has one less electron. The resulting sandwich works much like a battery: the layer that has surplus electrons becomes the negative terminal (n) and the side that has a deficit of electrons becomes the positive terminal (p). An electric field is created at the junction between the two layers.

When the electrons are excited by the photons, they are swept to the n-side by an electric field, while the holes drift to the p-side. The electrons and holes are directed to the electrical contacts applied to both sides before flowing to the external circuit in the form of electrical energy. This produces direct current. An anti-reflective coating is added to the top of the cell to minimize photon loss due to surface reflection.

PV Solar systems are undoubtedly what comes to peoples’ minds when they talk about solar energy. Considering that in an hour, the sun radiates solar energy enough to cover for human energy consumption for a year, then going green with solar PV panels is perhaps in the right direction! However, with solar energy systems’ technology, we are still behind in capturing this naturally free vast amount of energy provided by nature. Let’s have a look at the basic advantages and disadvantages of a PV solar system.

Pros of a PV Solar System:

As the source of the energy is Sun, it is free and abundantly available.

The operational and maintenance cost is very low, almost negligible, compared to the costs of other renewable energy systems.

PV solar systems are totally silent, producing no noise at all; consequently, they are a perfect solution for urban areas and for residential applications.

As in all renewable energy sources, solar energy has intermittency issues; not shining at night but also during daytime, there may be cloudy or rainy weather.

For a continuous supply of electric power, especially for on-grid connections, Photovoltaic panels require not only Inverters but also storage batteries; resulting in the increase in investment cost for PV panels considerably.

Additional equipment is required to convert direct current (DC) to alternating electricity (AC) in order to be used on the power network.

What are the applications of a PV Solar System?

PV Solar Systems are one of the highly used sources of energy in residential areas and industrial locations. Let’s have a look at the applications of a PV Solar System.

Besides being used as a power source, a PV solar system is used for other things also. Take a look.

India is one of the highest users of PV Solar systems. As the demand is more, there are many PV solar companies in India.

We hope this guide has been useful for everyone seeking information about PV solar systems. Got any queries related to PV solar panels? Drop your questions in the comments section.

2 Responses to “What is a PV Solar System? A Complete Guide”