Is solar power effective during the night?

Home / News & Updates / Is solar power effective during the night? 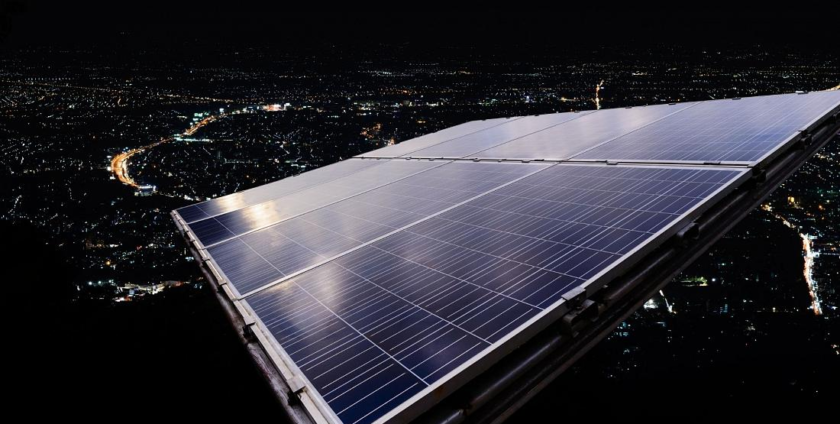 The demand for electricity is increasing day by day. Now, I am sure every one of us is feeling the heat of paying the high electricity bills.

Solar energy can be a great alternative. It is freely available, doesn’t burn a hole in the pocket, and improves grid security. Seems like there are enough reasons for anyone to consider switching to solar energy.

Although there are many pros of solar energy, a few topics need to be understood thoroughly before making a decision on solar energy. The most important question while considering buying solar panels!!! Do solar power plants work during the night? I have done a bit of research and come up with an answer.

Are you ready to go through the solution?? Here we go, then.

What are solar panels?

Let’s start from the beginning. Solar panels are made up of several smaller units known as solar cells. The devices work by gathering light provided by our neighbourhood star, the sun. They then convert the light into a direct current (DC).

You may hear the power they produced referred to as photovoltaic (PV) energy; this translates to ‘light-electricity.’ A single panel will just generate electricity sufficient for 1 or 2 smaller appliances. To create a solar system that can power a house or building, you would require an array with many solar panels connected together.

How do solar panels work?

As the solar panels convert light into power (DC), the power gets sent through the system’s inverter. From there, it gets converted to alternating current (AC) power. Is this ringing a bell from science class? If not, we’ll remind you. AC is the power most households run on. This is what you get when the utility feeds electricity into your home for you to watch television, cook dinner, and simply turn on the lights.

Yes, solar power plants work in cloudy weather. But, not as effective as during normal weather. Expect them to produce 10-25% of their normal power output, depending on how thick the cloud cover is.

If there is cloud coverage and diminished sunlight, then solar panels will not work at their maximum efficiency level on snowy days. With that said, the snow itself is usually not a problem, particularly because a dusting of snow is easily whisked away by the wind.

Snow will only impede your solar panels if the snowfall is so extreme that the panels become completely buried or if the weight of the snow compromises the integrity of your solar panel structures.

Do solar panels work during nighttime?

Technically, no. Solar panels do not produce energy at night. The photovoltaic cells in solar panels must have sunlight to create electricity. But that’s not the bottom line. Solar panels offer two indirect nighttime energy solutions.

Solar power plants work hard all day, producing electricity from the sun. They also support sustainable solar energy solutions at night. After sunset, you can continue benefiting from their energy production through net metering and solar battery storage. So, when you ask, how do solar panels work at night? These are the two indirect ways that they can.

Solar energy is changing the way we power our lives. Electric grid connection with net metering and solar battery storage both allow your solar energy system to provide electricity when your solar panels are resting—so you can rock around the clock.

Then, how do homes with solar energy work during the night? As mentioned, solar panels don’t generate electricity at night. But they tend to produce extra power when the sun is out during the day. In order to balance things out and keep the electricity running after dark, solar customers use either solar battery banks to store energy or net metering.

Wait a minute. Can’t we just use the “night solar panels”? Surely, you can. But there’s a catch.

Now many of you might be asking what a night solar panel is. Well, night solar panels are like normal solar panels, but they allow us to harvest electricity from the night sky. Created by Professor Jeremy Munday and coined ‘anti-solar cells’, the solution produces enough energy to charge a mobile phone.

Traditionally solar panels, or photovoltaic cells, have suffered from the effects of changeable seasons and the fact that they don’t work at night. From cloudy weather to dwindling day length, it’s not just the dusk that stops them from providing a viable renewable energy source for people in many parts of the world.

The nighttime solar cells essentially work the same way as their daylight counterparts but in reverse. Every night, heat escapes the earth in the form of infrared radiation in order to keep the planet at a constant temperature.

Why solar is the future of India?

The energy consumption in India is huge. Unfortunately, India is facing an electricity shortage. The electricity generated from a solar power plant is a great alternative.

As the world grows more tech-savvy, one consumes more electricity. It would help if you had electricity to light up your homes, cool down your homes, charge your gadgets and even clean your clothes. It is an essential commodity, and you cannot skimp on it.

By reducing your use of electricity, you can minimize your expenses to a certain extent. However, you cannot make any6 major changes to electricity bills.

As resources become scarcer, you will find yourself splurging more on electricity and appliances. The technological revolution can only mean that you will have to embrace the changes.

Solar power panels have taken the world by storm over the last decade, and their popularity doesn’t appear to be slowing down anytime soon. The performance of a solar power plant in different weather conditions depends on the company or brand of your solar system. So make sure to choose the Solar PV suppliers such as JJ Solar. We are one of the top 10 solar panel manufacturers in India. We strive to provide the best solar panels in India and are well-informed about the latest technological developments.

For Any Kind of Product Information & Updates
We use cookies to ensure that we give you the best experience on our website. If you continue to use this site we will assume that you are happy with it.Accept